The Staroverinskaya license area (referred to by Auriant Mining as Solcocon) is located in Zabaikalsky Krai region of Russia – a historically prolific gold producing region with numerous world class gold deposits. The license block is situated at the confluence of the small Srednyaya and Nizhnyaya Borzya rivers in the Zabaikalsky region, 35 km from Kalga, the administrative center of Kalgansky District of Zabaykalsky Krai and 640 km from Chita, the administrative center of Zabaykalsky Krai, Russia. The area is well known for gold and polymetallic deposits with the Bystrinskoye (Norilsk Nickel), Novoshirokinskoye , Taseevskoye (Highland Gold), and Savkino (White Tiger) mines. 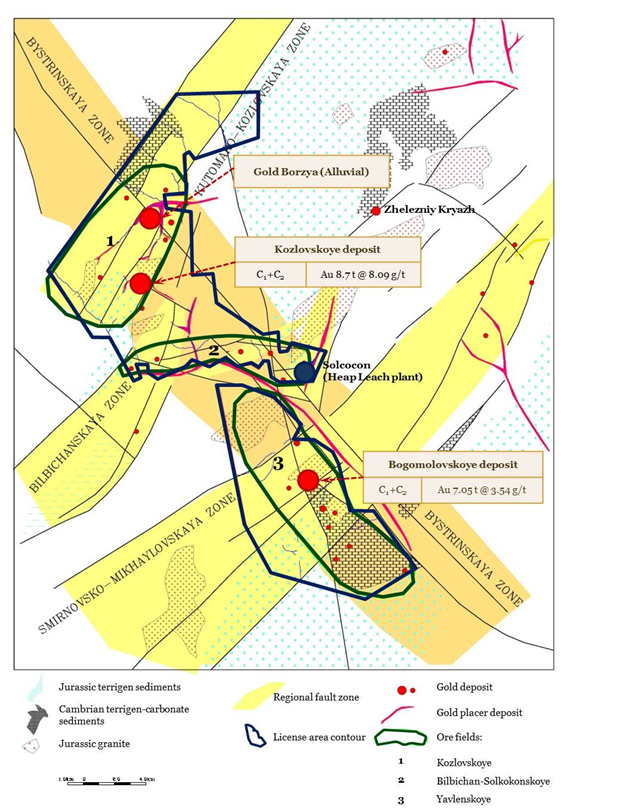 The Staroverinskaya license area is situated in the central part of the Argun micro-continent, part of the Mongol-Okhotsk belt. The Zabaikalsky Region where Staroverinskaya is located includes such world class gold deposits as Baley, Taseevskoye, Bystrinskoye, Klyuchevskoye, all of which contain resources in excess of 3 Moz.

The Staroverinskaya license area features sediments of different ages, from Precambrian to lower Cretaceous. These sediments are characterised by different lithology. These are carbonate rocks and terrigen sediments (sandstones, siltstones and conglomerates), as well as volcanic deposits (rhyolites, tuffs, trachyandesites, and trachybasalts).

The most promising formations for localisations of gold deposits are the Cambrian and Jurassic carbonate sediments.

The major tectonic features of the area are the northwest-southeast fault zones (Bystrinskoye) and the northeast-southwest fault zones (Kutomaro-Kozlovskaya and Smirnovsko-Mikhaylovskaya). These are large (hundreds of kilometres long) structures. These first-order fault zones are accompanied by second and third order faults which play an important role in the localization of gold and polymetallic mineralization. Exploration undertaken by Auriant has identified three highly prospective ore fields, namely Yavlinskoye, Bilbichan-Solkokonskoye, and Kozlovskoye.

All of the gold deposits and occurrences in the general vicinity can be divided into four types, depending on the composition of the ores and their localization.

The first type are gold scarn deposits. The Zhelezny Kryazh deposit belongs to this type. It is located in the northeastern part of the area outside the property. Mineralization is associated with magnetite scarns.

The second type is gold-arsenic. This type includes the Kozlovskoye deposit and a number of other nearby ore occurrences. Ore bodies are composed of beresites, mineralized with disseminated sulphides. The main ore minerals are arsenopyrite, pyrite, galena and gold.

The third type are gold-polymetallic deposits as represented by the Smirnovskoe deposit, which is located in the far eastern part of the licence outside the license area. These ore types are located on the contacts of the dolomitic limestone and intruding Jurassic granites. The southern portion of the license area primarily features deposits of this type.

The fourth mineralized type is gold-quartz-tourmaline. Gold occurrences of this type are widely distributed and common in the license area. They include the Podgornoye deposit, part of the Bogomolovskoye deposit, and a number of other occurrences.

In a number of large gold deposits (for example the Bogomolovskoye deposit) several mineralization types are identified.

In 2013 Solcocon mined ore from two open pits at the Bogomolovskoye and Kozlovkovskoye deposits. In addition waste stripping work started on the Podgornoye deposit.